Curbing the Amount of Waste, etc. Generated by the Sharp Group

Sharp has been working to reduce waste and to recycle as much of it as possible in an effort to contribute to building a resource-recycling society. In fiscal 2020, the amount of waste, etc. generated by the Sharp Group decreased by 2% compared to the previous fiscal year to 67,000 tons, thanks to efforts such as transferring manufacturing to more efficient plants and changing the packaging material used in shipping.

Additionally, the amount of recycling fell by 5% from the previous fiscal year to 58,000 tons. Furthermore, the final landfill disposal rate remained at 0.63%. In Japan, as a result of continuously advancing efforts, such as recycling waste and waste liquids and turning them into valuable resources, the final landfill disposal rate was 0.03%, marking the 20th consecutive year of achieving zero discharge to landfills* since fiscal 2001. Going forward, Sharp will strengthen waste reduction efforts at overseas bases and aim to achieve zero discharge to landfill on a global scale. 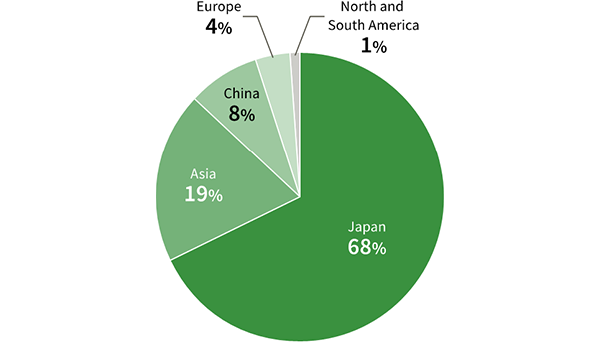 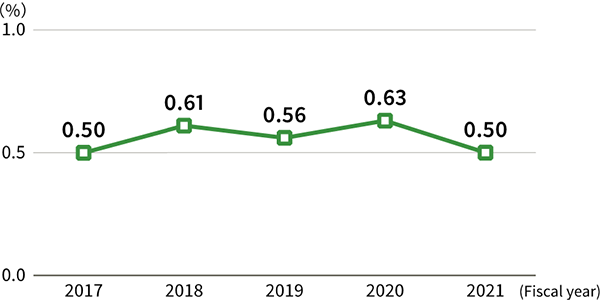 In Japan, Sharp properly stores and manages waste PCB (polychlorinated biphenyls) in accordance with the Act on Special Measures Concerning Promotion of Proper Treatment of PCB Wastes. Sharp is on track to finish treating PCB waste to make it harmless by the legally set March 31, 2027 deadline.

Expanding the Recycling of Used Products

As a member of the B Group*1 for home appliance recycling, Sharp has constructed—and is operating—a highly efficient recycling system consisting of 17 recycling plants in Japan. In fiscal 2020, Sharp collected 2.386 million units (up 13% over the previous fiscal year) of the four types of appliances covered by the Home Appliance Recycling Act. The processed and recycled weight amounted to 70,000 tons (up 11% over the previous fiscal year). For all four appliance types, the B Group’s rate of recycling exceeded the legally stipulated levels.

Note: All figures are rounded off to the nearest whole number.

Toward Making Better Use of Resources

Sharp and Kansai Recycling Systems Co., Ltd.*2 have joined forces to make effective use of resources and to improve recycling efficiency. Additional magnetic separators were introduced in fiscal 2020 to further improve the quality of iron recovered. Collected home appliances are first pulverized by large crushers, after which various separators are used to collect the metal. This time, installing extra magnetic separators increased the opportunities for recovery, which boosted the precision of iron selection (reducing the admixture of impurities). In fiscal 2019, iron selection precision ranged between 95% and 98%, but in fiscal 2020 it was consistently at 98% or higher. 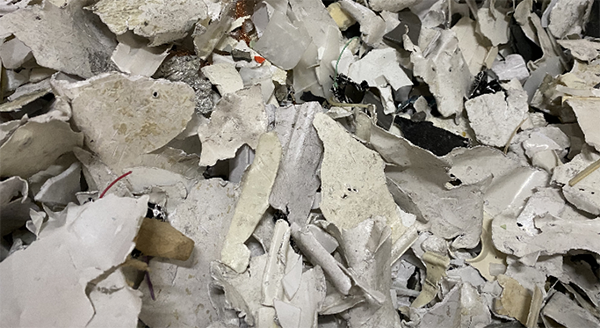 Reusing and Recycling Copiers and MFPs in Japan

Sharp is reusing and recycling copiers and MFPs collected both through Sharp distribution channels and through common industry channels. The company is also collecting used toner cartridges and remanufacturing them to the same quality standard of new products, thus assuring that customers will always get the same high quality. Sharp designs its toner cartridges for easy reuse and recycling. This ensures durability and reduces the amount of time needed to reprocess used cartridges.

In 2007, Sharp’s American manufacturing and sales subsidiary SEC (based in New Jersey) established MRM*1 to manage recycling of AV products. Growing nationwide efforts have seen a total of 1,750 collection points established for used products. MRM operates in accordance with the laws and regulations of each state and recycled a total of 56,000 tons of used products in fiscal 2020.

The EU WEEE Directive*2 (2012/19/EU) stipulates that the manufacturer is responsible for collecting and recycling products shipped within the EU. Each Sharp European sales company collaborates with established recycling entities in the EU sales region to meet this requirement. Efforts are also made to reduce the volume of landfill waste by taking into account regulations governing packaging materials and batteries.

In Vietnam, the introduction of a recycling law in 2017 has obliged manufacturers and importers to establish a collection scheme for products sold within the country. Sharp’s Vietnamese sales subsidiary SVN (based in Ho Chi Minh City) collects used products at collection points established in Vietnam and ensures they are processed appropriately by licensed recyclers for proper disposal.

In India, a recycling law (the E-Waste Management Rules 2016, amended in 2018) is in place, which imposes extended producer responsibility (EPR) on manufacturers and others. SBI, Sharp’s Indian sales subsidiary, has partnered with a local recycler, 3R Recycler, to carry out the proper disposal of used products. In addition, SBI works with a local NGO, “the Indian Pollution Control Association”, to recover plastic waste and recycle it.

Environmental Technologies That Contribute to a Sustainable, Recycling-Based Society

In recycling materials, such as when end-of-life plastic is reused to make new products, the open-loop material recycling scheme is commonly adopted. It involves reusing recycled materials to make things like daily necessities and sundries on the assumption that these goods are disposed of as municipal waste after use.

As opposed to this type of recycling, Sharp and Kansai Recycling Systems Co., Ltd.*1 jointly developed closed-loop plastic material recycling technology with a view to making better use of finite resources and reducing waste. This technology enables the repeated recovery of plastic from used consumer electronics products as well as the reuse of that plastic in parts of new consumer electronics products. The technology has been in practical use since fiscal 2001, when the Act on Recycling of Specified Kinds of Home Appliances (Home Appliance Recycling Act) was enacted in Japan.

Sharp has been striving to make more plastic recyclable through the development of new technologies. These include a technology for recovering high-purity PP (polypropylene) from mixed plastic parts and parts that contain metal; a technology for improving the properties of recovered PP/HIPS*2 and PC+ABS*3 materials so that their quality is on a par with that of virgin materials; a technology that gives materials added value by imparting properties such as flame retardancy, weather resistance, and an antibacterial property, with the aim of expanding applications for recycled plastic; and a quality-control technology for ensuring optimal quality. Thanks to the development and introduction of these technologies that integrate everything from recovery to quality control, Sharp has been able to establish closed-loop material recycling to produce high-grade recycled plastic.

Recycling Plastic Recovered from the 4 Types of Home Appliances 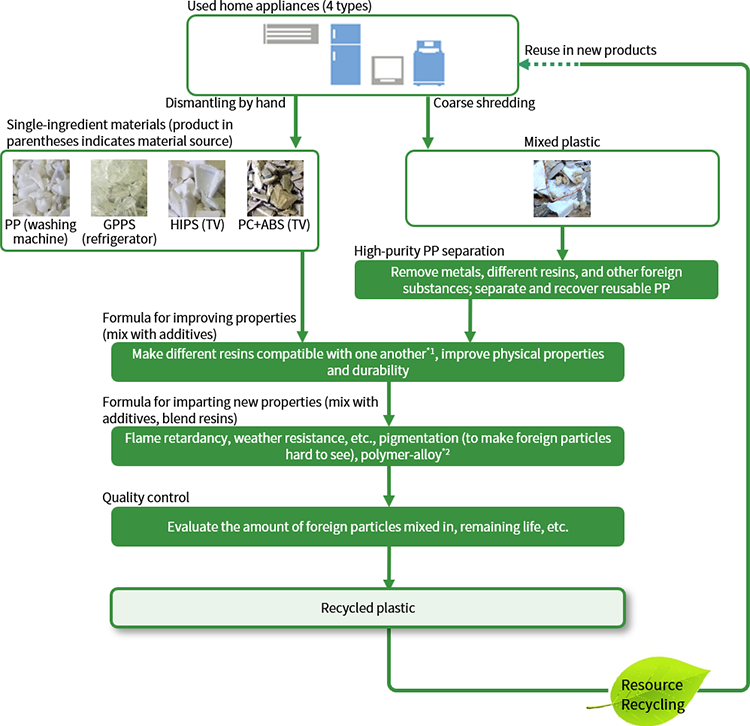 Examples of Recycled Plastic Use 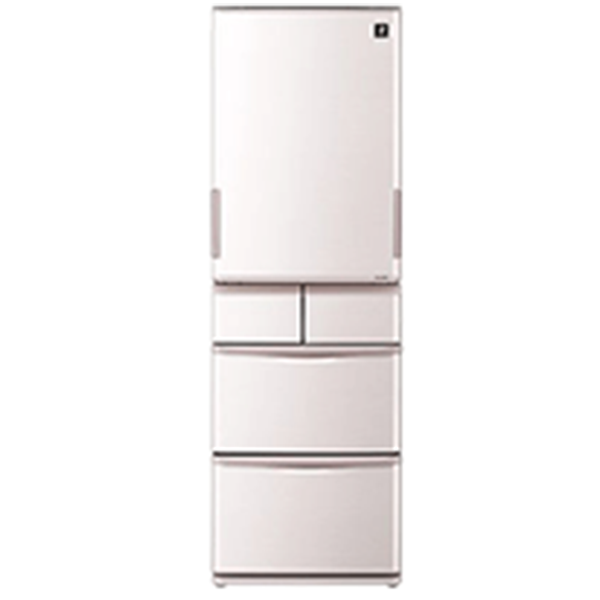 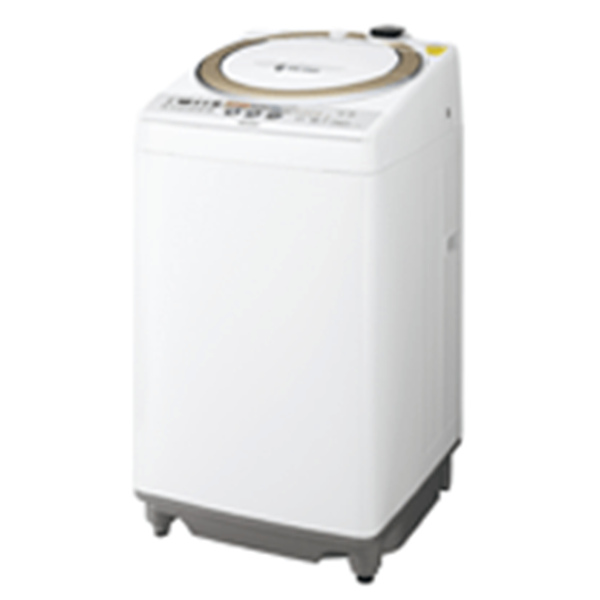 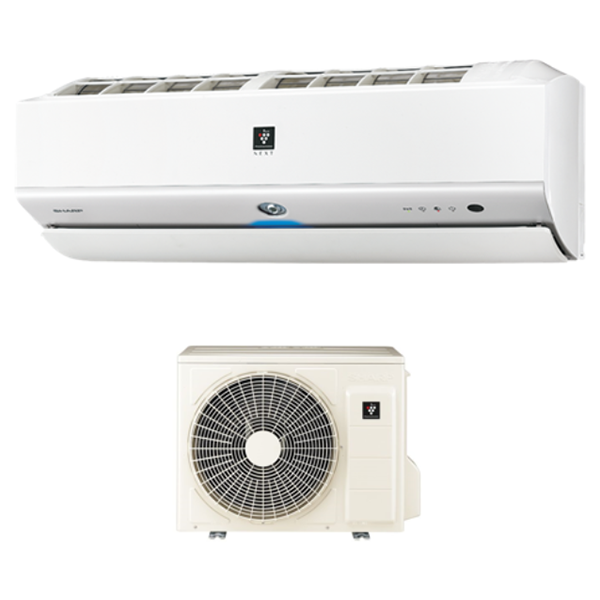 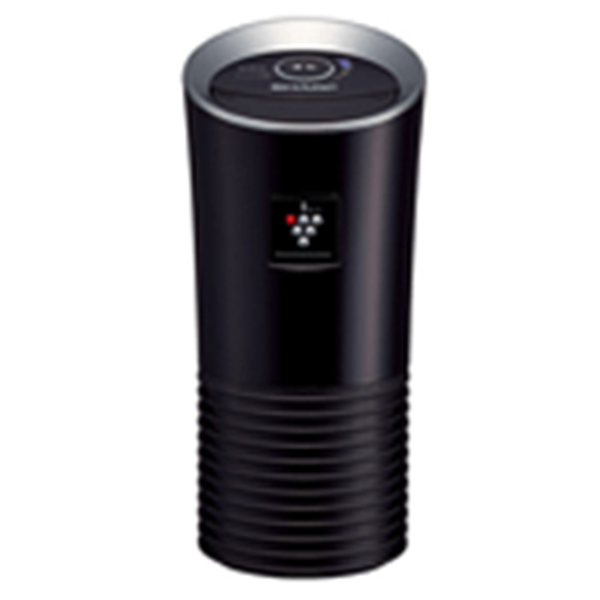 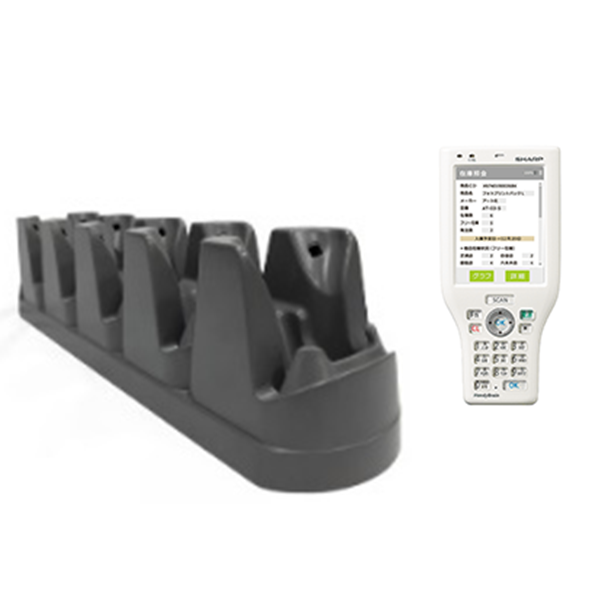 In response to the increasing seriousness of pollution from used plastic, countries are enacting and enhancing various laws and regulations related to plastic recycling. In particular, there is a concerted push to move away from the traditional linear economy, characterized by mass production, mass consumption, and mass disposal, and towards a circular economy, characterized by limited input and consumption of new resources and minimal waste production. In Japan, as well, society’s attitude towards plastic usage has changed significantly, as evidenced by the enactment of the Act on Promotion of Resource Circulation for Plastics*1, which focuses on resource recycling across the entire life cycle of plastic products, making it increasingly important that plastic materials are properly disposed of and recycled.

Against this background, Sharp is pursuing greater recycling of used plastics, not only through horizontal recycling, in which used plastics are made as good as new material and incorporated into the same parts as they were originally used, but also through upgrade recycling, in which the recycled plastic is given added value with flame retardancy, weather resistance, or high stiffness.

In fiscal 2020, Sharp applied its own technology for rendering plastic flame retardant and improving its durability to develop recycling technology capable of giving strong flame resistance and physical properties coupled with long-term durability to polypropylene recovered from used home appliances. This technology has the potential to change the current situation where metals or expensive engineering plastics*2 are needed to make parts that require high flame retardancy, such as those used around home appliance power switches or heaters. With the practical application of this technology, recycled plastics can be used as alternate materials on such parts, creating promise for lighter and cheaper products that are also more environmentally conscious.

Sharp will steadily move ahead with the development of this recycling technology with the goal of applying it to mass production very soon. 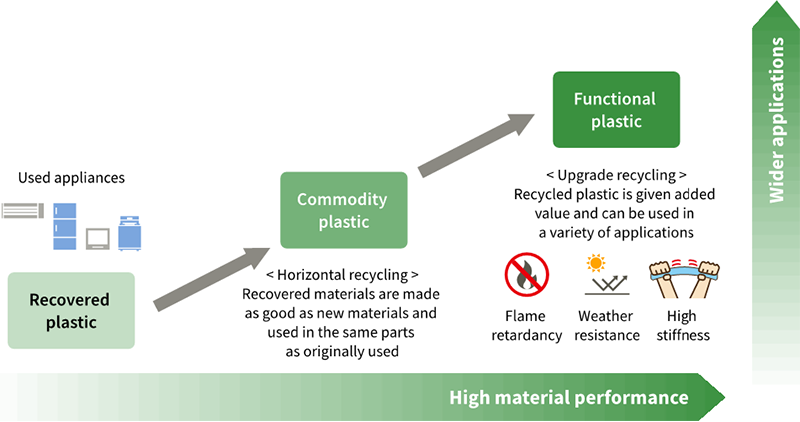 Water resource problems are arising on a worldwide scale with the increase in the world’s population, the economic growth of developing countries, climate change, and other factors. Sharp is striving to make effective use of water resources in line with the environmental conservation guidelines stipulated in Sharp’s Basic Environmental Philosophy, the Sharp Group Charter of Corporate Behavior, and the Sharp Code of Conduct. In particular, Sharp recognizes that securing the water resources necessary for the production of LCDs and other electronic devices is a serious issue that could affect business continuity. That is why Sharp is pursuing the reduced use of new water and an increased use of recycled water.

The volume of new water used by the Sharp Group in fiscal 2020 increased by 23% compared to the previous fiscal year to 9.0 million m3 due to gaining new production bases and other factors. The improvement rate of water intensity was 11%, compared to the baseline year of fiscal 2012.

To minimize the effects on business continuity of the risk of water shortages, Sharp assesses water risk at its plants using the Aqueduct assessment tool developed by the World Resources Institute (WRI).

The Kameyama Plant (Kameyama, Mie Prefecture, Japan) and the Mie Plant (Taki District, Mie Prefecture, Japan) require a large amount of water in the production process for LCDs. All of the water discharged from the production process is collected and reused via a closed-loop recycling system adopted at both plants. Through measures such as this, the Sharp Group is maintaining a recycling rate* of at least 60%. Moreover, Sharp is dedicated to making effective use of water resources globally, such as reducing the amount of new water used by recycling water discharged from the production process at WSEC, a manufacturing base in China. 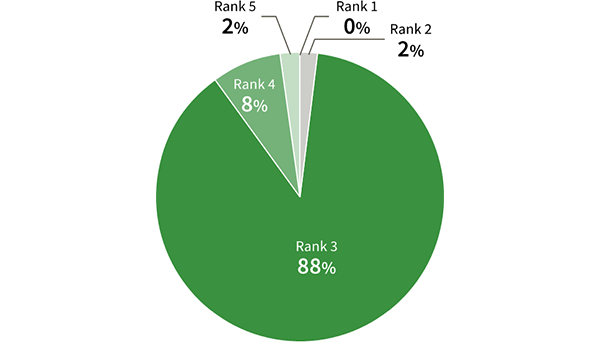 The Mie Plant (Taki District, Mie Prefecture) has adopted a closed-loop water recycling system to repeatedly recycle the large amount of water used for the production of LCDs. The water discharged from the production process contains chemicals that must not be released from the plant untreated. All of this water is collected and goes through steps such as biofiltration (the natural decomposition of chemicals using microorganisms) and filter filtration, before being purified with dedicated equipment. The resulting water is used repeatedly in production. 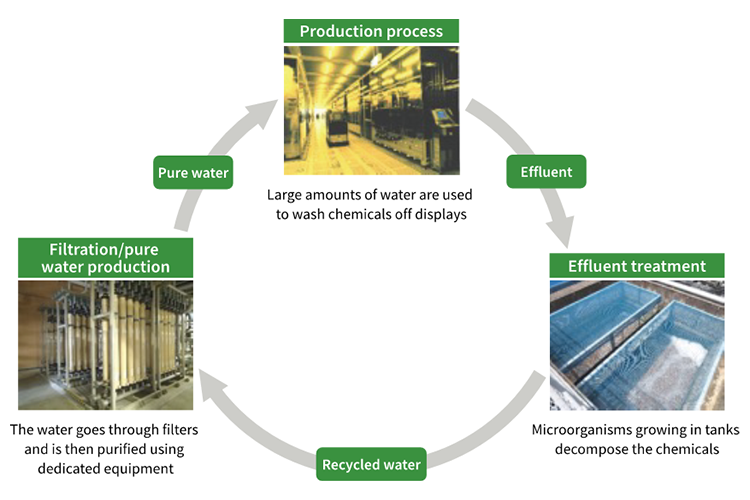 At WSEC, a production base in China, large volumes of greywater* are generated when producing pure water for use in the manufacturing process. This greywater was previously treated and disposed of as wastewater. But now WSEC has set up storage tanks for the greywater, which is used in restrooms and air conditioning cooling systems. Thanks to these efforts, WSEC has been able to reduce the consumption of clean water by approximately 63,000 m3 per year. 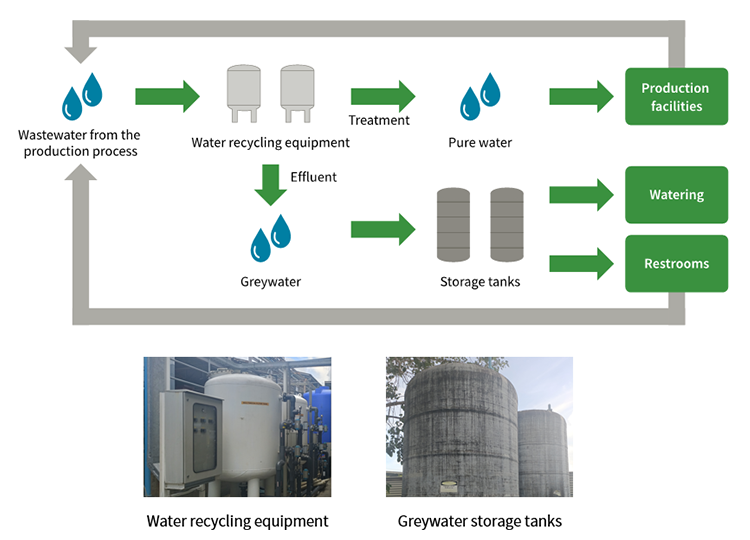